Shortly after midnight on 30th April 1975, the final broadcast from the CIA station in Saigon rang out.

“This will be the final message from Saigon station,” wrote station chief Thomas Polgar.

“Let us hope that we will not have another Vietnam experience and that we have learned our lesson. Saigon signing off.”

In the weeks preceding that final broadcast, South Vietnam – also known as the Republic of Vietnam – had utterly capitulated in the face of an onslaught from the People’s Army of Vietnam (PAVN) and Viet Cong forces.

Two years prior, the United States had signed a peace agreement with North and South Vietnam to end its involvement in the conflict. By 1975, US military operations had ceased and only a small contingent of military, intelligence and diplomatic personnel were left in-country.

With no help coming from the United States, South Vietnam was destined to fail, and panic began setting in. The Army of the Republic of Vietnam, known as the ‘ARVN’, fought valiantly at times despite overwhelming odds and poor leadership.

Retreating south, many ARVN troops lay down their weapons and made their way home. The fight was over. Alongside them were droves of Vietnamese civilians scrambling to escape the Viet Cong and NVA. Tens of thousands were displaced as each province fell to North Vietnamese forces.

Across South Vietnam, civilians tried to flee by any method possible. Airbases were awash with hopeful refugees while some resorted to commandeering helicopters. Others placed their hopes on escaping by sea. Thousands would die in the process. 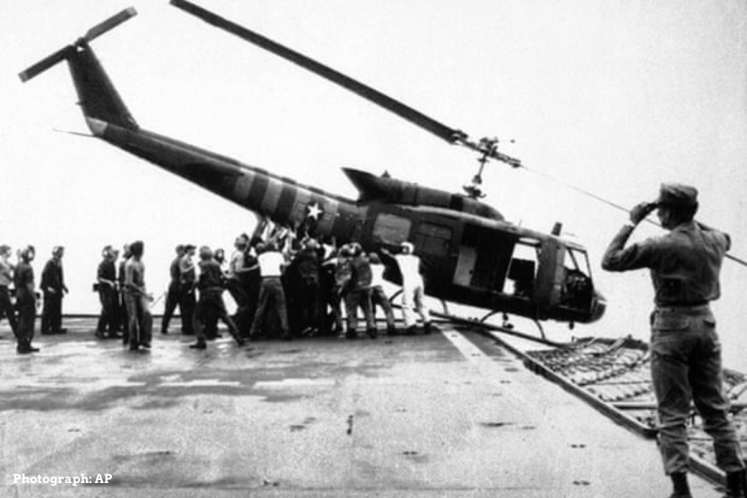 With the country on the verge of collapse, President Nguyễn Văn Thiệu resigned on 21st April and was replaced by Trần Văn Hương. He lasted a week.

With North Vietnamese forces on the outskirts of Saigon, the prospect of brutal urban combat and a fight to death for South Vietnam was edging ever closer. In order to prevent further bloodshed, Minh called on ARVN forces to surrender.

At around noon on 30th April, North Vietnamese tanks broke through the gates of the Independence Palace in Saigon. Waiting on the steps of the palace were Minh and a host of government advisors.

“We have been waiting for you so that we could turn over the government,” Minh told Colonel Bùi Tín of the North Vietnamese Army. “You cannot give up what you do not have,” Bùi Tín replied.

The speed at which South Vietnam fell was breath-taking, and while North Vietnamese troops approached the southern capital, final preparations for American withdrawal were in full flow.

The steady trickle of personnel leaving the beleaguered country had become a flood. Many of those with links to the US or South Vietnamese government were also evacuated in the days preceding the withdrawal, but as expected, many more were left behind.

In his final message from the Saigon station, Polgar said: “It has been a long fight and we have lost. Those who fail to learn from history are forced to repeat it.”

Nearly half-a-century later, it appears nothing much has changed and lessons have not been learned. In Afghanistan, the withdrawal of US and NATO troops has, unsurprisingly, led to complete chaos.

Lashkar Gah in Helmand province, a region in which British troops fought and died for several years, has also fallen within the last 48-hours.

The Taliban’s growing momentum has prompted the US to recall troops and personnel back to Kabul, while efforts are being made to evacuate embassy staff. British troops are also being deployed to Kabul to assist with evacuation plans.

As expected, refugees across the country have made their way to Kabul seeking shelter, with reports noting that more arrive every day.

The parallels here are obvious, yet despite this there are still some who refuse to draw comparisons to the fall of Saigon in 1975. Just two months ago, President Biden outright rejected such comparisons.

“There’s going to be no circumstance where you’ll see people being lifted off the roof of an embassy of the United States from Afghanistan,” he said.

Reports in the US suggest Afghanistan could fall within 90 days. President Biden may come to lament his words.